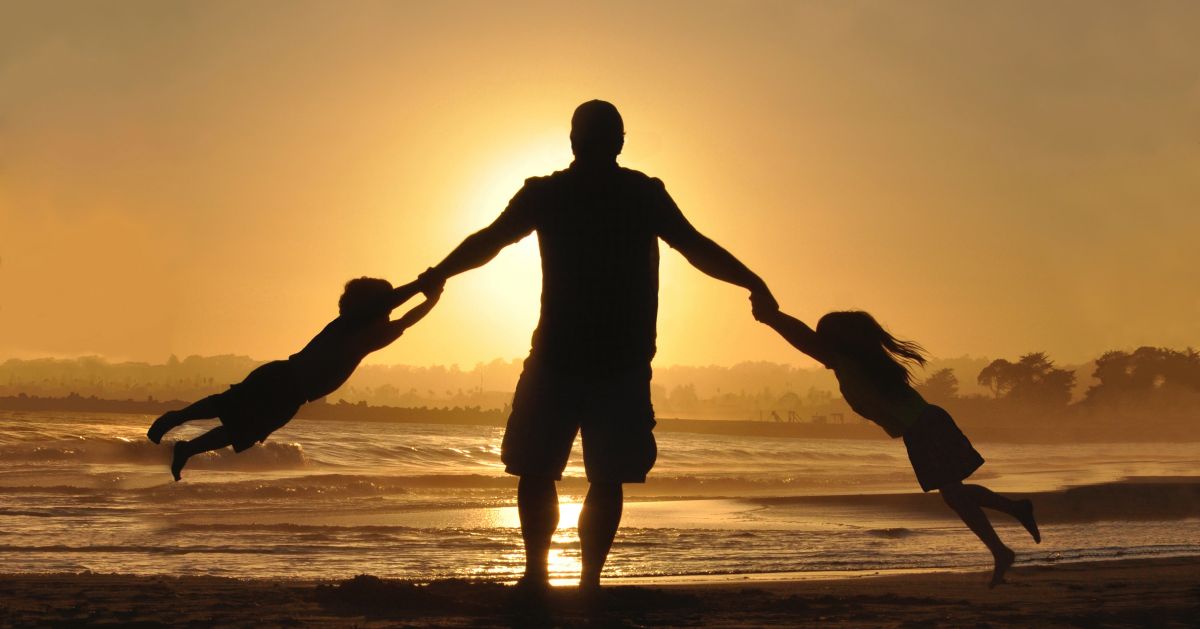 When my oldest son was around 2 or 3, he and I invented a “game” that involved me knocking him down over and over again. He stood on the bed, and I swept his legs with my right arm and shoved him in the chest with my left hand as fast as I could. He would fall on his back, laughing hysterically, then scramble to his feet and beg me to do it again. When his younger brother was big enough we included him, and the two of them would have happily done that all day if I’d had the time (and endurance).

At the time, we just thought it was fun (and wearing them out made bedtime easier). I didn’t realize then that “roughhousing,” as my parents had called it, has long-term benefits.

“Fathers tend to play with their children a little more roughly than mothers do — chasing, wrestling, ‘airplane rides,’ etc.,” writes Dr. Ben Kearney in his book Building Together. “Rough-and-tumble play is important for development — it helps children practice their motor skills, bond with their caregivers and, perhaps most important, begin to learn the limits and consequences of behavior. And because other children like physical play, those who are exposed to it at home are often more popular among their peers. This is how we start to develop not just interpersonal skills but learn how to take turns, what’s fair and not fair, agreeing to and abiding by rules, etc. Ethical development is grounded in the play that dominates the first ten years or so of our lives, and fathers play a key role in that.”

Fathers suffering from depression, however, are less likely to engage in active play with their children. And depression is more common in new fathers that you may think.

“Growing evidence suggests that the postnatal period may be associated with higher prevalence of depressive symptoms in fathers as well as in mothers,” according to a 2016 study published in BMC Public Health, “and may also be associated with adverse emotional, behavioral and cognitive outcomes in children.”

One of the risk factors cited in the study was unemployment. Between mid-March and mid-June, more than 45 million Americans had filed unemployment claims, mostly due to the coronavirus pandemic. Millions of children could pay a heavy price for this sharp economic decline, and not just due to material deprivation.

In a 2018 paper published in the Journal of Affective Disorders, Dr. Vaheshta Sethna of King’s College of London, and others, noted that many studies have shown links between depressive symptoms in fathers and withdrawn parenting. They also “highlight an important limitation” of those studies: They’re based on the design of mother-child studies and “may not be able to detect and accurately classify unique features of father-infant interactions.”

“For instance, episodes of sudden vocal and behavioural activity in close proximity to the infant are coded as ‘intrusive’ using a maternal coding scheme. However, in the context of father-infant interactions, these playful behaviours (which excite, surprise, and stimulate children) tend to promote attention and positive communication between the [two]. Consequently, our understanding of early parenting by fathers is incomplete due to the conventional (though changing) maternal focus on parenting behaviours.”

The Future for Studying Mental Health for Fathers

Sethna’s study found that fathers diagnosed with depression engaged in less “excitatory playfulness” with their infants than the non-depressed fathers in the control group. Noting that her study involved a small sample size, she added that it “highlights the need for the continued development and application of father-focused measures. Studying fathers who are experiencing difficulties in their relationship with their infants is an important undertaking.”

OhioGuidestone’s depression screening tool for male fathers during the perinatal period (before birth and up to 12 months after birth) is the only one of its kind. A current study based on responses is on hold due to the pandemic, but will resume. The goal is to offer more services to fathers, including mental health intervention and targeted employment support. The evidence shows that fathers have unique and important roles to play in infant and child development.

June is Responsible Father Month in Ohio. The Ohio Commission on Fatherhood is planning a Fatherhood Summit for Sept. 2-3 in Columbus.

There are no upcoming events at this time.